Doodles at Google - The creativity behind today's most popular logo 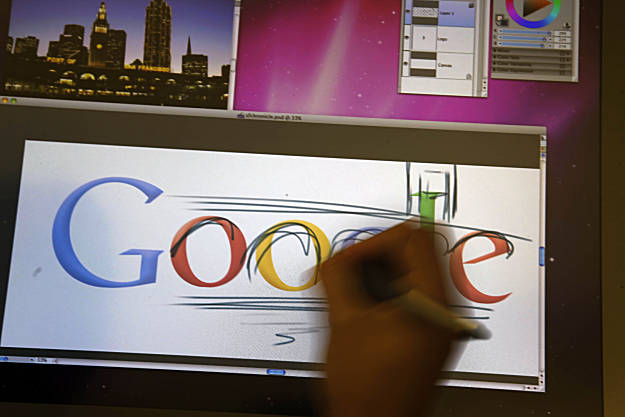 They are unknown, but their works of art are seen by hundreds of millions of people across the globe. They were art nerds in school - teased by peers or called to the principal's office for doodling in class - but are now working at one of the world's most important companies.

They are Google doodlers, a small team of artists who create the decorative logos for the company's home-page, images that celebrate events as varied as the 30th anniversary of Pac-Man and the 70th birthday of John Lennon to the invention of the bar code and the landing of Mars Rover.

"Friends made fun of me," Chief Doodler Micheal Lopez says. "I played on the basketball team, but between practice, I'd sit on the bench drawing. I drew during math class. I drew on my parents' walls. My parents were convinced I wasn't going to get a good job."

Lopez and his team produce doodles that can be fun and whimsical, stunning and interactive. But the drawings serve an unspoken purpose: They humanize a behemoth built on algorithms, servers and semantics, connecting users across the globe to the Google domain.

For the French and Germans, Google recently celebrated the 110th anniversary of the birth of writer Antoine de Saint-Exupery. For Slovakians, Google marked the 418th birthday of educator Jan Amos Komensky. For the British, there was the 213th birthday of Mary Shelley, creator of Frankenstein. And in the United States, Google users were given the iconic yellow-brick-road image marking the 71st anniversary of the first showing of "The Wizard of Oz."

Doodle headquarters consists of a handful of cubicles in a main building on the Mountain View campus, within view of the volleyball court. The doodlers - the oldest is 33 - stare at computer screens, pore over research materials, sketch images on large Cintiq tablets, and play around with the blue-red-yellow-blue-green-red Google letters. They create doodles for more than 100 domains globally.

Lopez - whose business card says "Chief Doodler" - is a 30-year-old single dad from Pittsburg. Clad in jeans, T-shirt and black Pumas, Lopez carries a sketchpad with him wherever he goes.

Ideas for doodles come from users and from colleagues. Lopez keeps a running list of notable holidays and anniversaries, and the core team of four doodlers meets once a week. Meetings are held once a month with other Google designers and artists, and take place anywhere they can find "white boards and beanbags," Lopez said.

At a recent meeting, the team brainstormed over the Mary Shelley doodle.

"I have this concept for a doodle that's a little abstract and a little obscure," Lopez explained. "There is this human aspect to Frankenstein. He has thoughts and feelings and memory." 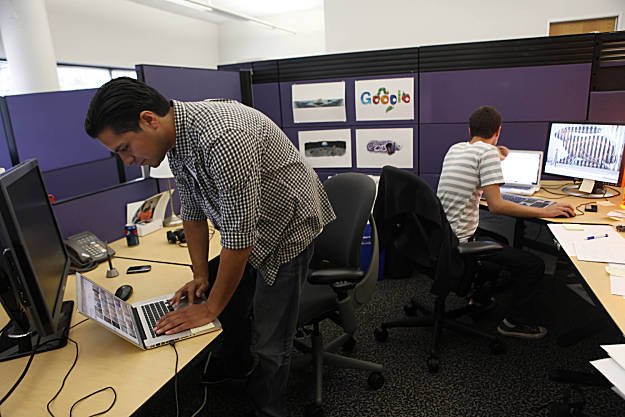 The doodle that materialized from the brainstorming session was drawn by Lopez and shows a hallway in the home of Dr. Frankenstein. Each letter in Google was represented in the frame of a photo. "There's a staircase that leads to his lab," Lopez said of the drawing. "There are family photos on the walls. You see a flash of light coming from upstairs. And in the light is this creation of his."

The doodle ran in England and parts of Europe, but not in the United States. Distribution of doodles is decided by Lopez and his team, and doodles are up for 24 hours, starting at midnight. (Occasional doodles have a longer shelf-life, including the playable Pac-Man - a doodle with 256 levels, like the original game, and the Lennon tribute, as it was the team's first animated video doodle). As part of the process, doodlers reach out to copyright holders, and work closely with the estate.

Lopez took over as chief doodler in 2008, having arrived at Google as a temp worker in 2003. He is now a senior web designer and leads a team that creates all graphical assets across Google. 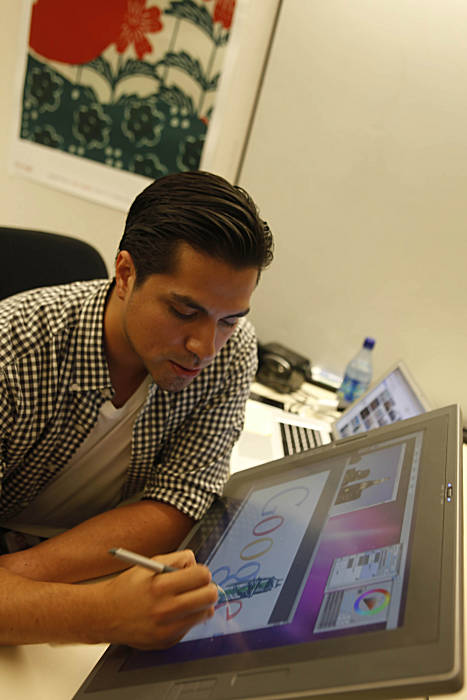 The chief doodler baton was handed to Lopez by Dennis Hwang, who grew up in Korea and came to the United States in middle school, not speaking a word of English. After doodling his way through school, Hwang graduated from Stanford with degrees in art and computer science. In 2000, working as an intern, Hwang was asked by Google founders Larry Page and Sergey Brin to do a doodle for Bastille Day. Hwang realized, "Something that used to be frowned upon - my drawing - turned out to be my greatest asset." Page and Brin had started the doodle tradition in the summer of 1998 as a way to alert users they were "out of office," at the Burning Man festival. In case the site crashed, they wanted users to know why no one at Google was answering the phone. Using clip art, Page and Brin created a small stickman figure placed behind the second "o" in Google.

"Larry and Sergey had done some of these themselves," Hwang said of the first doodles. "And they used freelance artists. The doodles didn't have any consistency, and they covered mainly the big U.S. holidays. So when I joined, we started a slightly more formal process and looked at how to have more fun with it."

He continued, "Since early on, our users have been very passionate about the doodles. In April 2003, we celebrated the 50th anniversary of the understanding of DNA. I created something I thought was pretty aesthetically exciting and proudly posted it. Within minutes, I started to get e-mails from around the world, with scientists saying this is not a double helix. It was a couple of pixels off in terms of the crossover point."

Hwang, now a webmaster at Google who continues to consult with the doodle team, believes that the Google home page, in essence, is the face of the company. "I think when users see the face changing to reflect the holidays and occasions they too are celebrating with their families, it gives them a connection and reminds them there are people working hard behind the scenes." Marketing expert and author David Meerman Scott, whose most recent book is "Marketing Lessons from the Grateful Dead," noted: "You can contrast what Google is doing to what most organizations do around their logos, which is to have 30-page books detailing how the logo can be used, and which PMS color and how many millimeters it can be from a corner of a page. It is all very rigid. Google is showing they're fun to work with, and how do you quantify that?"

In 2008, Google launched Doodle 4 Google, inviting school kids to draw their own doodles. This year's contest attracted 33,000 submissions from 20,000 schools. The winner receives a college scholarship, among other things.

The Google doodle continues to evolve, and more doodles are going "dynamic" - as opposed to static - and interactive. The John Lennon doodle, with the song "Imagine" reinterpreted, involved hand-drawn animation and sequences done in loose and gestural line work.

Two of Dutton's recent doodles were of Lennon and "The Wizard of Oz." "I watched 'The Wizard of Oz' over and over again and got all of the songs stuck in my head for weeks," Dutton laughed. "What resonated with me, ever since I was a kid, was the scene with Emerald City in the background and the field of poppies. It's such a colorful scene, and the colors are kind of Googly." He also was moved by a doodle he did on Saint-Exupery's "The Little Prince." "I'd never read the story, so before I started working on the doodle, I got the book and found a quiet spot on campus and read it," he said. "I'm glad I did. I cried at least three times. I really felt a connection. Then I sat down and said, 'OK, now I can do the doodle in a way users will feel the authenticity.' "

Dutton's childhood was spent moving from city to city, as his father was in the military. The constant was something easy to carry from place to place: paper and pens.

"I always drew," he said. "I remember drawing Sunday comics in second grade. My humor then, as now, was a bit underdeveloped. My teacher didn't appreciate my drawings - maybe too much toilet humor - and my parents were called to school."

His protracted adolescence has found a home. "It's been an interesting journey that led me here," he said. "It's incredible because my dad still has my drawings from second grade. He knew it would lead somewhere."

For Susie Sahim, who grew up in San Jose and began studying computer science in high school, the path to art was a surprise. "It wasn't until I had an English class assignment to illustrate a scene from one of Shakespeare's plays that I discovered I had a talent for drawing." She went on to study animation and illustration at San Jose State.

Her recent attention-grabbing doodle was the lush image for Earth Day.

Jennifer Hom, born and raised in New York, has been a part of the doodle team for just over a year.

"There were two things I couldn't believe about this job," she said. "The first was that I had a job and wouldn't have to rely on Mom forever. The second was that I had this job." Her doodles have included Gandhi, Frida Kahlo, textile designer Josef Frank and Hans Christian Andersen.

To commemorate Tchaikovsky's 170th birthday, Hom co-directed a photo shoot around the production of Swan Lake at the San Francisco Ballet. Dancers were posed to spell out Google, and the photos were used by Hom for the illustration.

"I now tell people, 'Follow your dreams, practice all the time, draw, draw, draw," Hom said. "I drew as a kid and never stopped."