“It was exciting being with him and watching him designing, or just watching him sketch.  He was in the business of making architecture, and his drawings were a means to that end." - Bruce Pfeiffer, Former FLW Apprentice In commemoration of the 148th birthday of America's best known architect, this blog is a collection of his greatest work. But first, here is a little blurb about who he was (just in case): Frank Lloyd Wright (born Frank Lincoln Wright, June 8, 1867 – April 9, 1959) was an American architect, interior designer, writer and educator, who designed more than 1,000 structures and completed 500 works. Wright believed in designing structures which were in harmony with humanity and its environment, a philosophy he called organic architecture. This philosophy was best exemplified by his design for Fallingwater (1935), which has been called "the best all-time work of American architecture".[1] Wright was a leader of the Prairie School movement of architecture and developed the concept of the Usonian home, his unique vision for urban planning in the United States. His work includes original and innovative examples of many different building types, including offices, churches, schools, skyscrapers, hotels, and museums. Wright also designed many of the interior elements of his buildings, such as the furniture and stained glass. An author of 20 books, Wright's colorful personal life often made headlines, most notably for the 1914 fire and murders at his Taliesin studio. Already well known during his lifetime, Wright was recognized in 1991 by the American Institute of Architects as "the greatest American architect of all time.

My career in Architecture, Landscape Architecture, Urban Planning, and Interior Architecture has its roots from many inspiring enigmas in the world of design. But in my mind, the one individual who has mostly impacted my understanding and passion in design is and probably always will be Frank Lloyd Wright. Aside from the provocative headlines he was embroiled in throughout his long career (well, provocative back then...) Wright's hand drawings, which gave birth to the Solomon Guggenheim Museum, the V.C. Morris Gift Shop, the John C. Pew Residence, Johnson Wax, and Fallingwater, are just as inspiring as their iconic physical manifestations.

It was well known that Wright visualized the building in its entirety before he or his draughtsmen even put a line on paper. Wright's perspective drawings were often begun using mechanical projection, which meant the building's plan is place at the bottom at an oblique angle corresponding to the angle the perspective will be drawn. Next, a horizon line with vanishing points is established above the plan. Then vertical lines are drawn at the plan's intersections, carried upward, establish the building's corners. In this way, the renderer does not exaggerate the true proportions of the building, leading to a clarity not present in most typical architectural drawings. The actual hand of Wright can often be identified by a finer line from a frequently sharpened pencil. Wright usually overlapped straight edge lines with those on opposing axes. In other words, the corners of his walls and roof lines become identified by their continuing lines at each intersection. His assistants would have erased the overlaps.

Located in Shorewood, Wisconsin, the Pew House is considered by many to be one of Wright's finest Usonian designs. Perched atop a hill overlooking Lake Mendota, the Pew house has been called a "poor man's Fallingwater". This is due in part to the fact that it is built into a hillside and features cantilevered overhangs facing toward the lake beneath the site. However, when someone asked Wright if this was the case, he quickly responded that "Fallingwater is actually a rich man's Pew House". 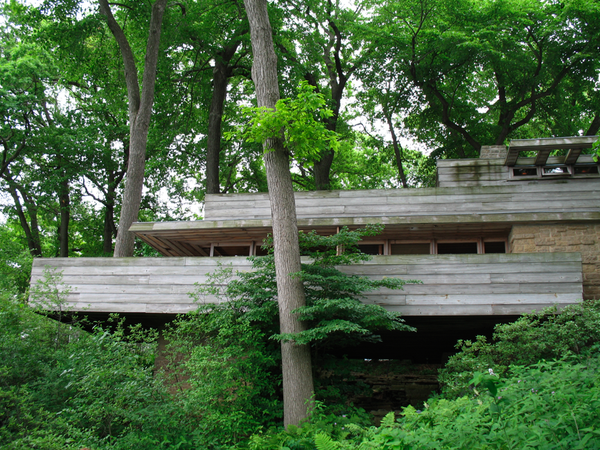 San Francisco's only Frank Lloyd Wright designed structure was originally named the V.C. Morris Gift Shop, and was designed by Wright in 1948. The V.C. Morris Gift Shop was originally a warehouse that Wright remodeled into this renowned building. It is quite unlike any of Wright's other structures, yet it retains characteristics that cross different periods of Wright's extensive career. The outer facade is unassuming, and would not stand out as a Wright designed structure to the common fan, but there is a certain complex modernism in its simplicity. The ramp was used as a prototype, or proof-of-concept for the spiraling ramp at the Solomon R. Guggenheim Museum in New York City. 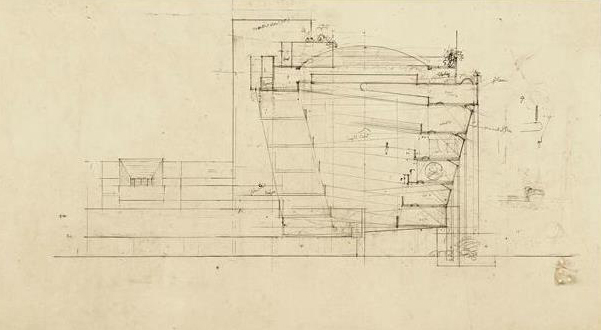 In 1943, Frank Lloyd Wright was commissioned to design a building to house the Museum of Non-Objective Painting, which had been established by the Solomon R. Guggenheim Foundation in 1939. In a letter dated June 1, 1943, Hilla Rebay, the curator of the foundation and director of the museum, instructed Wright, "I want a temple of spirit, a monument!"

Wright's inverted-ziggurat design was not built until 1959. Numerous factors contributed to this sixteen-year delay: modifications to the design (all told, the architect produced six separate sets of plans and 749 drawings), the acquisition of additional property, and the rising costs of building materials following World War II. The death of the museum's benefactor, Solomon R. Guggenheim, in 1949 further delayed the project. It was not until 1956 that construction of the museum, renamed in Guggenheim's memory, finally began.

Frank Lloyd Wright's masterpiece opened to the public on October 21, 1959, six months after his own death, and was immediately recognized as an architectural landmark. The Solomon R. Guggenheim Museum is arguably the most important building of Wright's late career. A monument to modernism, the unique architecture of the space, with its spiral ramp riding to a domed skylight, continues to thrill visitors and provide a unique forum for the presentation of contemporary art. In the words of Paul Goldberger, "Wright's building made it socially and culturally acceptable for an architect to design a highly expressive, intensely personal museum. In this sense almost every museum of our time is a child of the Guggenheim." 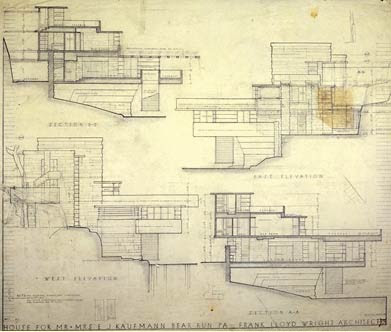 Fallingwater consists of two parts: The main house of the clients which was built between 1936-1938, and the guest room which was completed in 1939. The original house contains simple rooms furnished by Wright himself, with an open living room and compact kitchen on the first floor, and three small bedrooms located on the second floor. The third floor was the location of the study and bedroom of Edgar Jr., the Kaufmann’s son. The rooms all relate towards the house’s natural surroundings, and the living room even has steps that lead directly into the water below. The circulation through the house consists of dark, narrow passageways, intended this way so that people experience a feeling of compression when compared to that of expansion the closer they get to the outdoors. The ceilings of the rooms are low, reaching only up to 6’4″ in some places, in order to direct the eye horizontally to look outside. The beauty of these spaces is found in their extensions towards nature, done with long cantilevered terraces. Shooting out at a series of right angles, the terraces add an element of sculpture to the houses aside from their function. 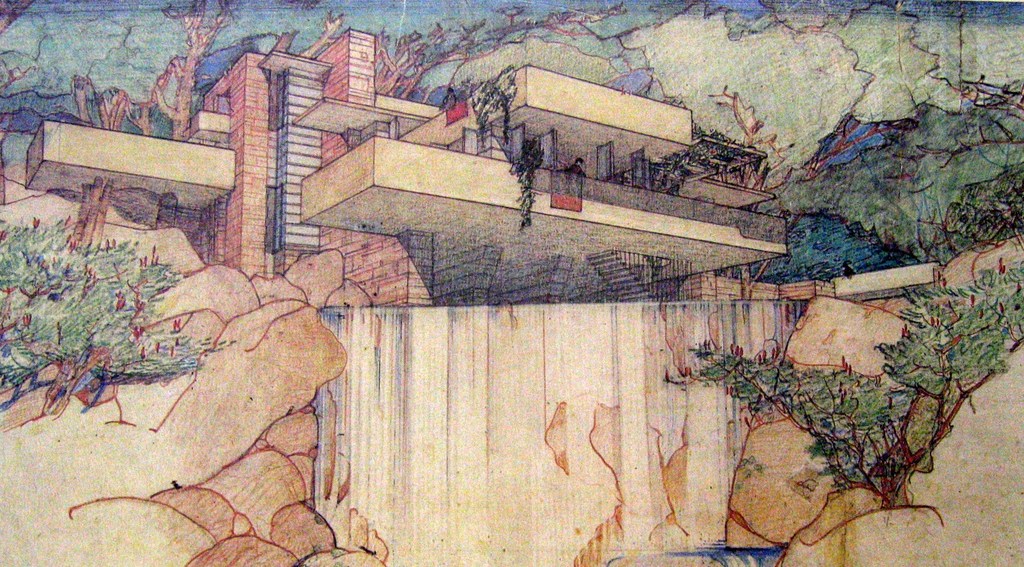 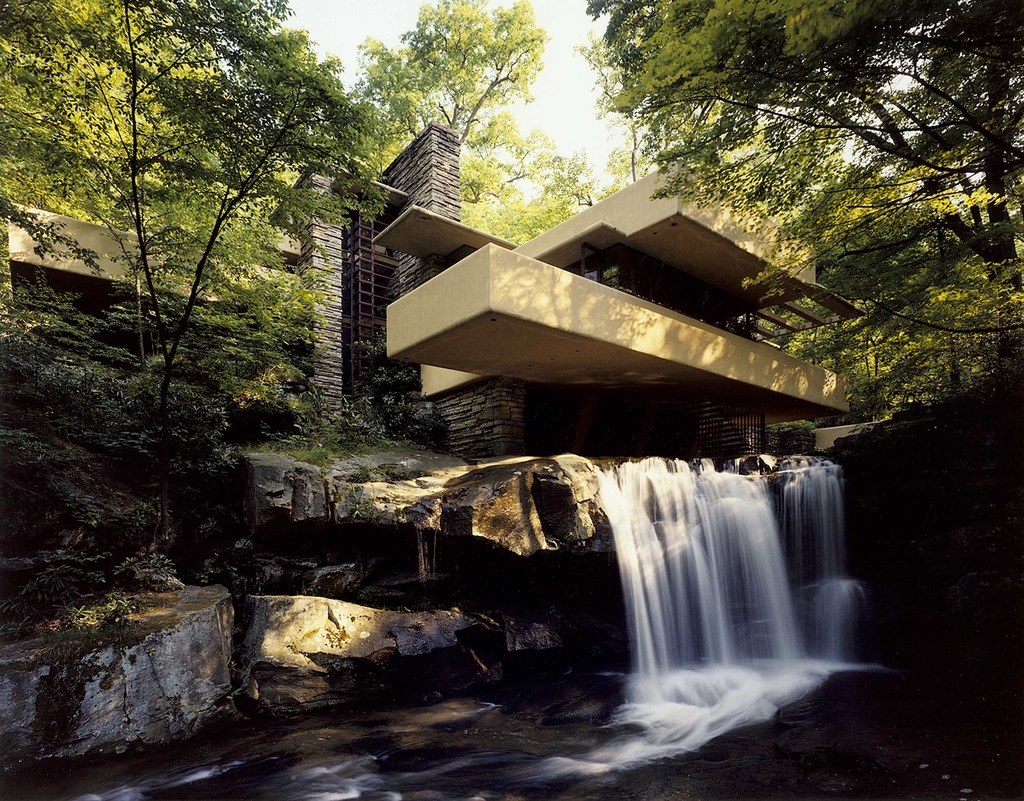 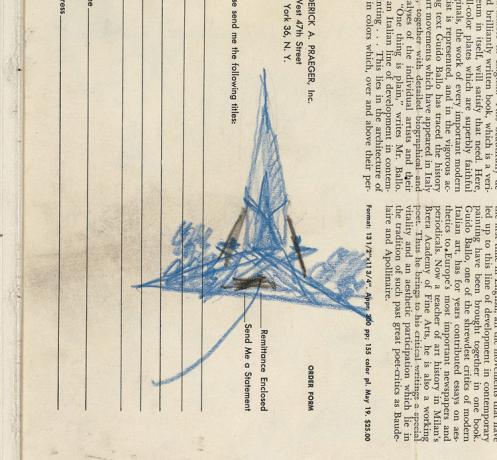