I have been working on a large mixed use CBD (Central Business District) Development in Beijing, China over the last couple of months and I wanted to share one of my unique opportunities of a new technique that I just recently started using on my project work. This opportunity came about because the rendering company in China did not have the resources to produce another rendering view without charging us an exorbitant amount of money and required another 3 days to produce the drawing. The problem was that this rendering was needed for a presentation to the Mayor of Beijing the very next day. As this presentation was about building programming and responding to how we would connect to the underground subway system, it was extremely critical that this drawing be produced in the most efficient way possible because time was an issue.

As a designer, not only do you need to be cognizant of the scope and parameters of the design problem that you are trying to delineate and solve, but you are also designing a process on whatever is needed to get the job done, and panic is never an option! So after receiving my marching orders, I went to my desk, picked up a red pencil and started to draw: Step 1: Red Pencil Blockout. Loose mock up of pedestrian connection to the Mall Level and Botanical Garden Enclosure. This began with an eyeline/horizontal line. Working in red pencil allowed layers of information to be loosely drawn with out over-committing on certain design elements until overall design feel was revealed. I drew people in order to understand the height, width, and depth of the space I was designing. Once I got what I wanted, I quickly drew the design elements in black ink. (20 minutes) Step 2: Ink Line Drawing. After getting confirmation and sign-off for the initial linework, I taped another sheet of trace over my block-out in Step 1 and illustrated the final linework with a Le Pen fine point pen. Sketch people were added for scale and to give proportion and activity to the space. At this point I had yet to decide whether or not to use photoshopped people, so I left the sketch people in if by chance I ran out of time. I then scanned the linework and imported it as a PSD (Photoshop Drawing) file and cleaned up the linework of any miscellaneous marks or wrinkles in the trace paper. (12 Minutes) Step 3: Image Shopping and Cropping. In order to give this rendering a more refined "digital" feel, I began looking for images and tidbits of entourage like people, ticket dispensers and metro maps (this is a main link to the Beijing Subway System), and then added base colors to the pavement, ceiling, and tones yellow for indirect and direct sunlight coming from the Botanical Garden. The image of the Botanical Garden was from one of my excursions to the Academy of Sciences in San Francisco's Golden Gate Park. The stone wall was used here because it is also repeated at the main entry of this CBD. By adjusting the filter and layering, I was able to get a soft semi-transparent effect that didn't overpower the other design elements in the drawing. (25 Minutes) Final Step: Presentation Image. This last and final step is the culmination of a balance of hand line work and carefully selected images with filters and effects. The final artwork was exported as a JPEG and emailed to Beijing where it was inserted into a powerpoint presentation. (Total Design and Production Time: Just under 1 hour) 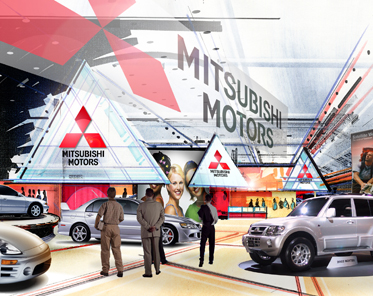 Comment by Brian Lin on October 14, 2011 at 8:54am
Hi Raysa,
Yes, it's a trendy term that is becoming very commonplace in the design office. I usually don't do this type of hybrid, but I enjoyed trying it out and probably wil continue to use this technique when appropriate.

Comment by Raysa Molina on October 14, 2011 at 8:48am
Hi Brian, It is funny, but that is the way a call my rendering, I merge photoshop, sketchup and hand drawing.